Every year my family publishes a newsletter titled the "Bellay Beagle". Since 1998 the Snoopy inspired newsletter makes its way into the mailboxes of families across the country and world, supporting over 0.0000185% of first class USPS stamp sales in December. Every year my mom asks me to write the article about 2 weeks after I know damn well that I should've written the article already. Then I usually procrastinate about a week. This year was no exception.

The only thing different about this annual tradition this year was that I had access to OpenAI's natural language processing model GPT-3. If you haven't heard of GPT-3, it is basically the state of the art AI for anything related to text. It is incredibly smart and capable. One user uses it to correct typos after scanning images in his journal. All he does is ask GPT-3 to "Make the original syntactically correct" and then pastes the results of his handwriting recognition program from his journal entry and it fixes all the typos from the handwriting recognition program. In the true fashion of an artificial intelligence conjured in the minds of cyberpunk Hollywood writers, GPT-3 is capable of understanding what you want and executing a task with excellent performance.

So I figured, now that OpenAI (an Elon Musk company -- with none of his attention I might add) is in public beta I may as well play around with it. I played around with it and had it write some funny chats between myself and my girlfriend. Onto more important tasks! I needed to write this article. So I asked GPT-3, politely, to help me. So in the text box I entered:

The assignment is to write a christmas newsletter in the style of a breaking news report. It should be witty, humorous, and ironic.

Zach has moved to the Nob Hill neighborhood in San Francisco.

The assignment is to write a christmas newsletter in the style of a breaking news report. It should be witty, humorous, and ironic.

Zach has moved to the Nob Hill neighborhood in San Francisco. He has been spotted in the area at local restaurants and bars.

From there I was off to the races. GPT-3 knew what I was going for. While it wasn't perfect every time I ran it, I would say about 1 out of every 5 runs was hilarious, and about 1 in 10 outputs inspired me to keep what GPT-3 wrote, or to use the ideas it was bringing to the table.

For example, while I was writing my article, in one sentence regarding a failed interview I wrote:

Anonymous executives at Google claim that Zach is a "rising star" in the technology industry, but was unable to extend him an offer citing

and after cherry picking, I was happy when GPT-3 returned

Anonymous executives at Google claim that Zach is a "rising star" in the technology industry, but was unable to extend him an offer citing that his "engineer-ness" was "not as high as our standards demand." 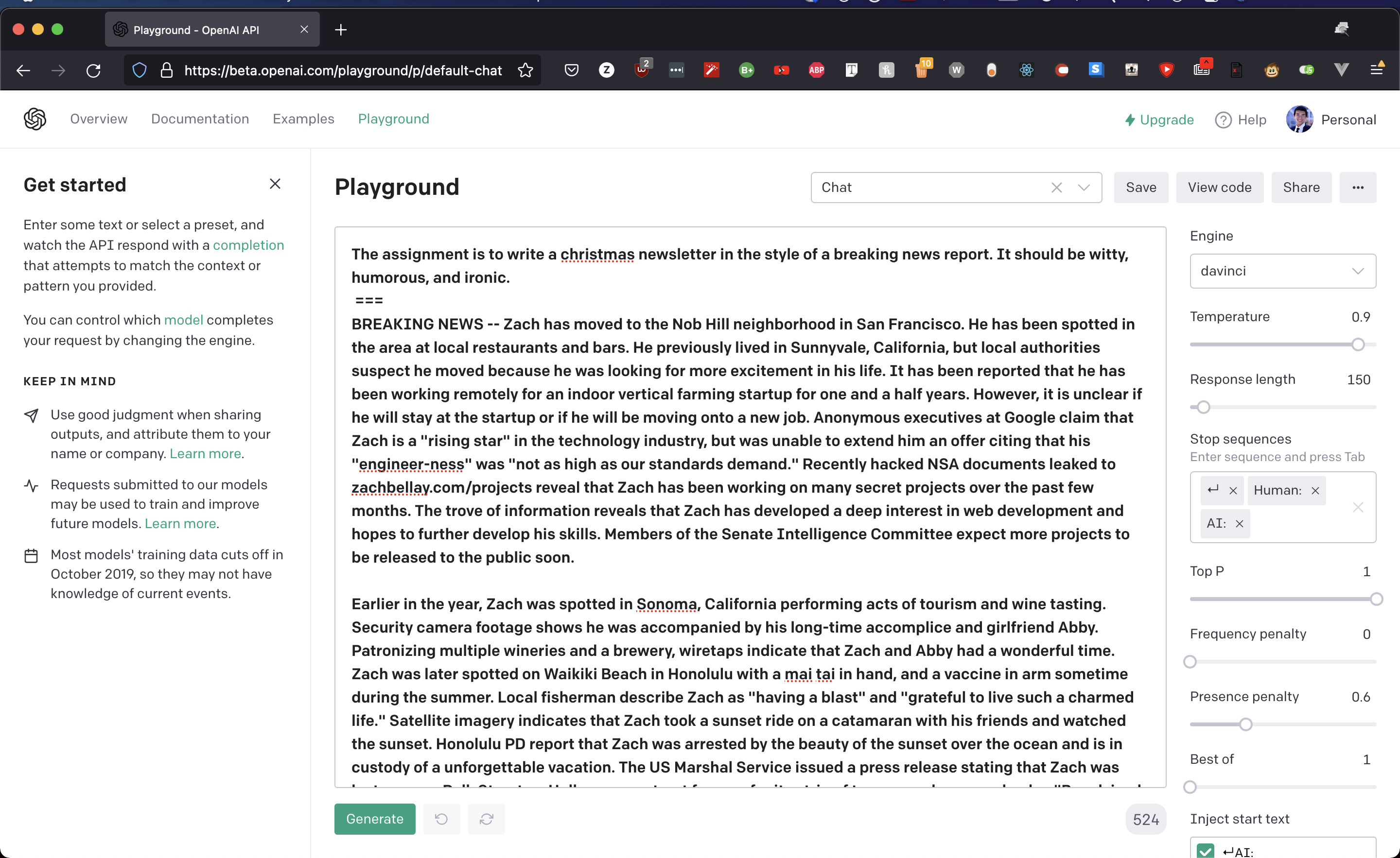 The user interface for interacting with GPT-3 on the OpenAI website.

A perfect way of getting the point across that I failed the Google interviews with some good humor.

To anyone out there looking to clear some writers block I would recommend playing around with GPT-3. It really is as easy as signing up, and then asking it to perform a task for you in a text box. I would say using GPT-3 actually increased my productivity in this case by about a factor of 2x. Pretty substantial!

Check it out here: www.beta.openai.com/overview.