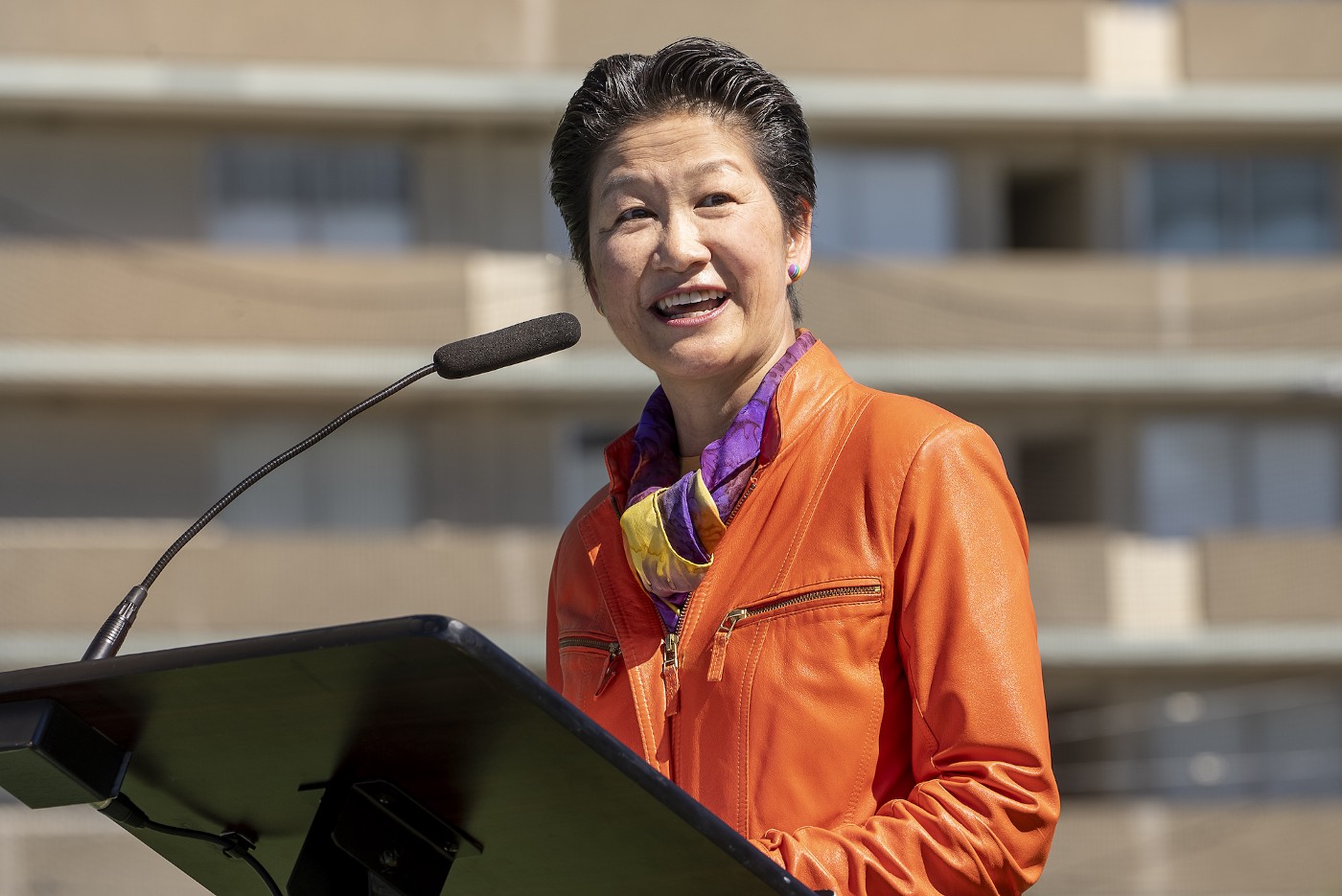 The SF Chronicle ran an article headlined "After making racist statement, S.F. school board member apologizes". After reading the statement that Hsu made, I am not entirely sure that this headline, and the criticism she is facing is really all that fair, or productive for that matter.

Here is the quote that Anne Hsu got in trouble for: 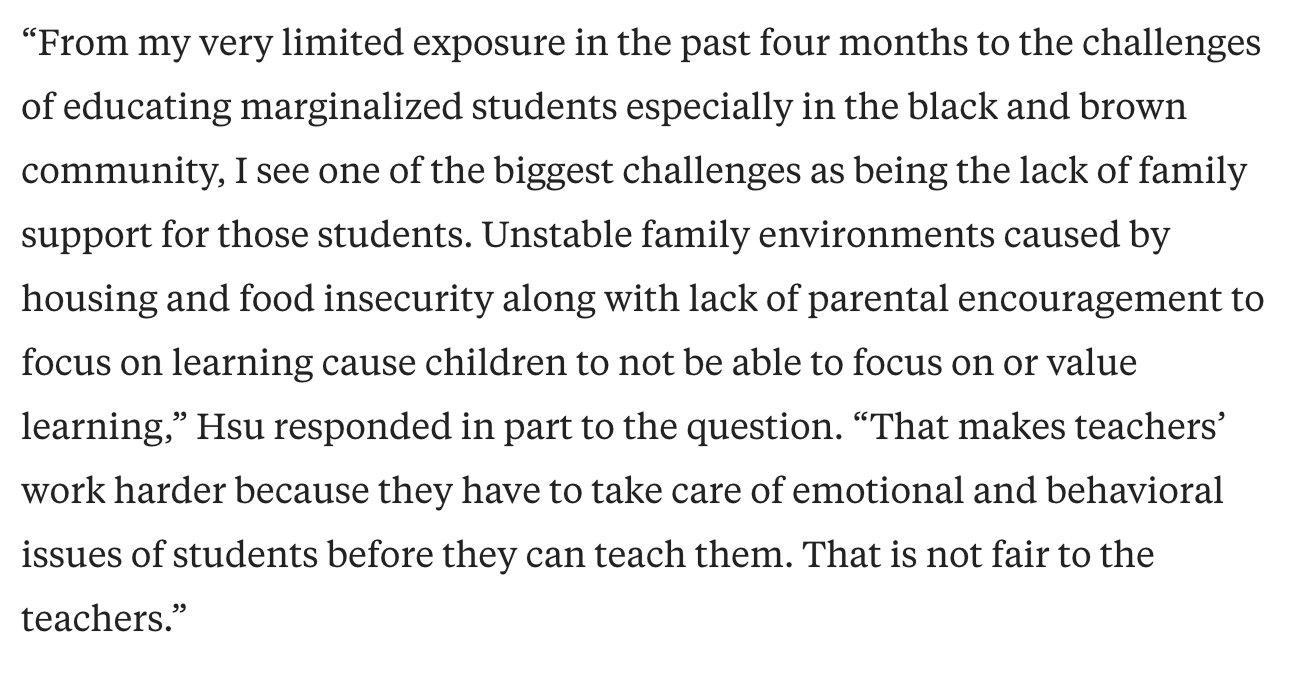 So I'd like to pick apart why I don't think this comment is racist, unless you explicitly assume that Anne Hsu is racist. Which maybe people closer to her know that she is in fact racist, but I am going to assume that, like most people, she strives for equality and despises racism.

So, the first sentence:

From my very limited exposure in the past four months to the challenges of educating marginalized students especially in the black and brown community, I see one of the biggest challenges as being the lack of family support for those students.

First off, Hsu admits that she isn't exactly an expert. So she is still learning and should probably given some leeway. Of course, you can't always use that as an excuse to cover up any ignorance or bigotry, but this seems to be a good faith attempt to help genuinely disadvantaged black and brown kids.

It's probably not very controversial to say that a stable family helps children and students succeed in life. Hsu says that she sees the "biggest challenges as being the lack of family support". My assumption is that the people who are calling Hsu racist imply that the reason Hsu thinks this is because of some sort of cultural or racial inferiority. When to me it seems pretty clear that Anne Hsu understands that racism is a systematically propogated problem that manifests in less economic opportunity and more hardship. Therefore, it wouldn't be a surprise if as a whole, black and brown parents had more difficulty supporting their children's academics because they're just trying to economically stay afloat. It's tough to tutor your kid in math or babysit them on Zoom when you don't have the luxury of working from home, or have to work long hours to make ends meet.

No one doubts that economic hardship can manifest as housing and food insecurity. These are basic needs on the Maslow's Heirarchy of Needs that if not met don't allow humans to reach their full potential.

along with lack of parental encouragement to focus on learning cause children to not be able to focus on or value learning.

This is probably the most controversial section of Hsu's statement. However, there is nothing explicitly racist being said here. You must insert an interpretation of what she actually means to conclude that Anne Hsu is truly racist. For example, this sentence could just as easily mean that Anne Hsu recognizes that economic hardship saps energy away from parents that could otherwise be spent on the education of their children. You have to assume here that what Anne Hsu really means is that black and brown parents don't care about their children's education as much as white and asian parents. It seems pretty hard to conclude that Anne Hsu is perpetuating the "false narrative that Black families are unable to support their children academically".

Now maybe the crime Anne Hsu committed was that she wasn't explicit in exactly what she meant. On the other hand, it seems pretty clear given the previous sentences that Anne Hsu is aware of the systemic issues of poverty and social injustices faced by black and brown communities, families, parents, and children.

I think where this leaves us is that this statement can be implicitly assumed to be racist, if you assume what Anne Hsu is saying that black and brown people don't support their children because of a cultural lack of interest in education. This can be not construed as racist if you interpret her statement to mean that the lack of parental encouragement comes not from culture, but from being short on time to teach your children because you are busy keeping the family in financial order.

Ultimately, Anne Hsu apologized and revised her statement to say that the cause of the black and brown achievement gap is "'historical inequities' rather than parents, saying that 'students in marginalized communities face extra challenges that create obstacles to their learning'". Which, if you assume this is what she meant the whole time, then it's really not controversial at all.

Despite voting Democrat, and being liberal, I get really frustrated when people "on my team" who are usually much more radically left bash people who clearly care about minorities because the language they used wasn't perfect. Others have made the comparision, but this puritanical obsession by the left to ensure that the language deployed must be exact otherwise you will be a blasphemer just breeds resentment by people who would otherwise support causes for people who are oppressed. I really don't understand why people on the left constantly want to yell at people who are genuinely trying to do the right thing and make the world a better place.

Something I think the left needs a lot more of is compassion and patience. There is so much constant outrage at minor "offenses" that it puts a chilling effect on having any sort of discussion, which just stymies any sort of progress.

But I digress. I am curious to know what you think and what your opinions are on this topic! Leave a comment or email me at zbellay at gmail dot com

This post is Day 4 of my #100DaysToOffload challenge. Want to get involved? Find out more at 100daystooffload.com