tl;dr: Me venting about what I thought was unfair treatment on Reddit. It really shouldn't affect me this much, but it does, so I have to blog about it to try and get it off my mind.

I do my best to be as informed a citizen as possible, so that I can help (in a small way), make society better, and therefore make the world a better place and to reduce human suffering. One outlet to achieve this is through civic engagement and discussion about political topics. I find that an honest discussion with someone that is non-judgemental is actually incredibly productive and eye-opening and will oftentimes change my perspective.

This is why I love talking to people face to face. First of all, being in the flesh is how humans were evolved to socialize, not mediated by a screen. Second, you are for the most part restrained by the rules of polite society such that you will show basic decency and respect when engaging in a face to face conversation with someone. Very rarely does a conversation turn into a screaming match where people simply talk past each other and don't listen.

The thing about social media that I find incredibly frustrating, and bad for my ego and mental health, is that I try to genuinely engage in conversations that are nuanced. Sometimes, people will reply to me in a way that feels like they are yelling and screaming at me for having a certain opinion. They do so because they have completely strawmanned my position and are treating me as some sort of idiot-boogeyman who they think is trying to bring down the social order.

For some reason social media incentivizes dunking on people. You see this all the time with ratio'ing on Twitter, or "owning the libs" on YouTube, etc, etc. Some basic circuit in our brain loves the cheap drama of good person destroys bad person with obvious argument. Dumb dumb gets annihilated by good smart smart. Maybe this is just because when we engage in conversations as a group, we simply have to appeal to the lowest common denominator so these more basic instincts come out to play. When having conversations one on one with people, you would never succeed in treating people as you do in social media. A real life example where this sort behavior learned on social media has bled over into the real world is when a woman in Seattle lost her mind after a man jokingly said his name was "Hugh Mungus".

She expresses righteous outrage and attempts to garner support from the crowd by claiming sexual harassment. This is obviously not a productive discussion, or even rooted in reality. This is unhinged behavior.

Similarly, I made the following comment as user SCUSKU on the r/SanFrancisco sub-reddit when a post was made asking why open-air drug markets are a thing. 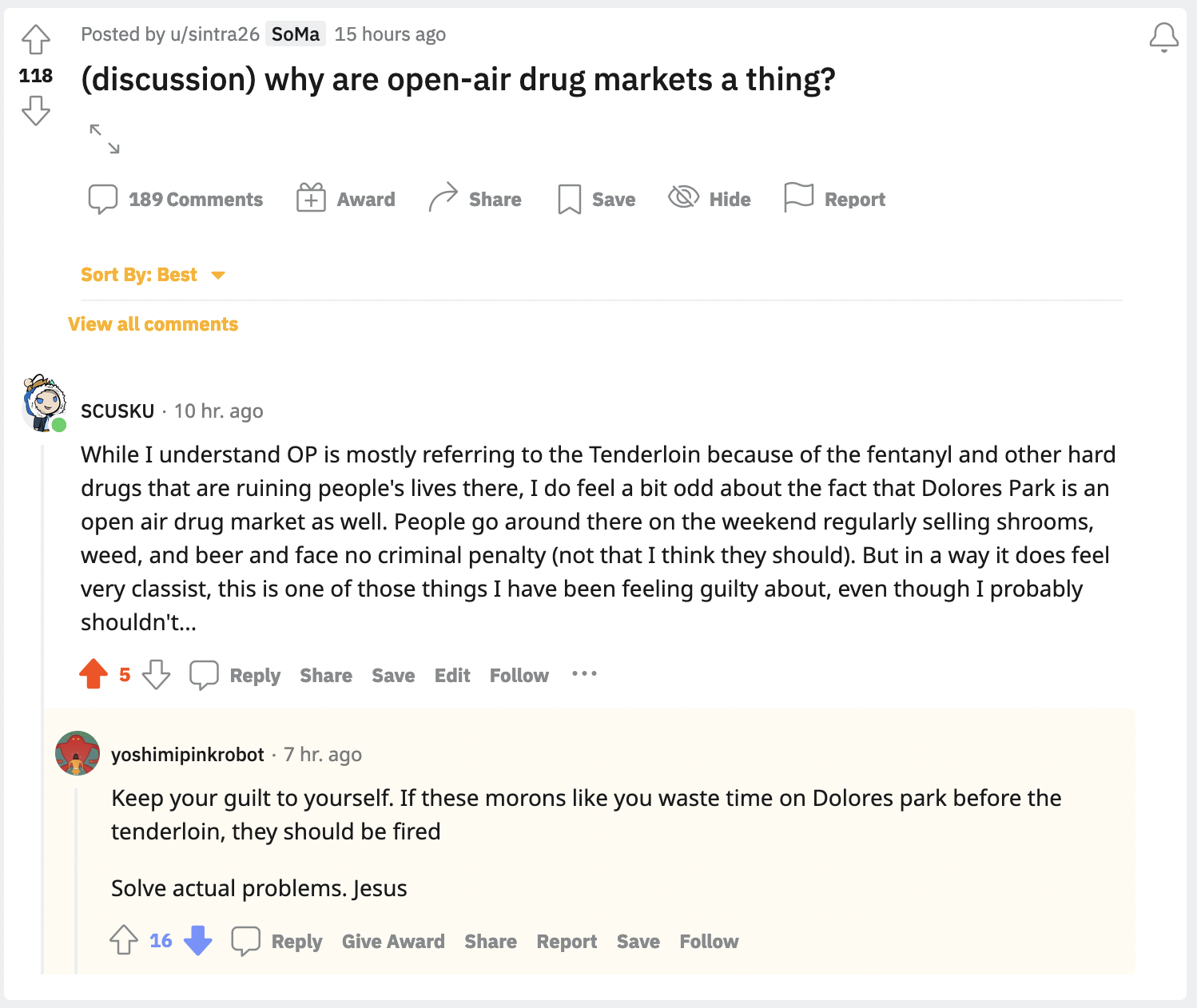 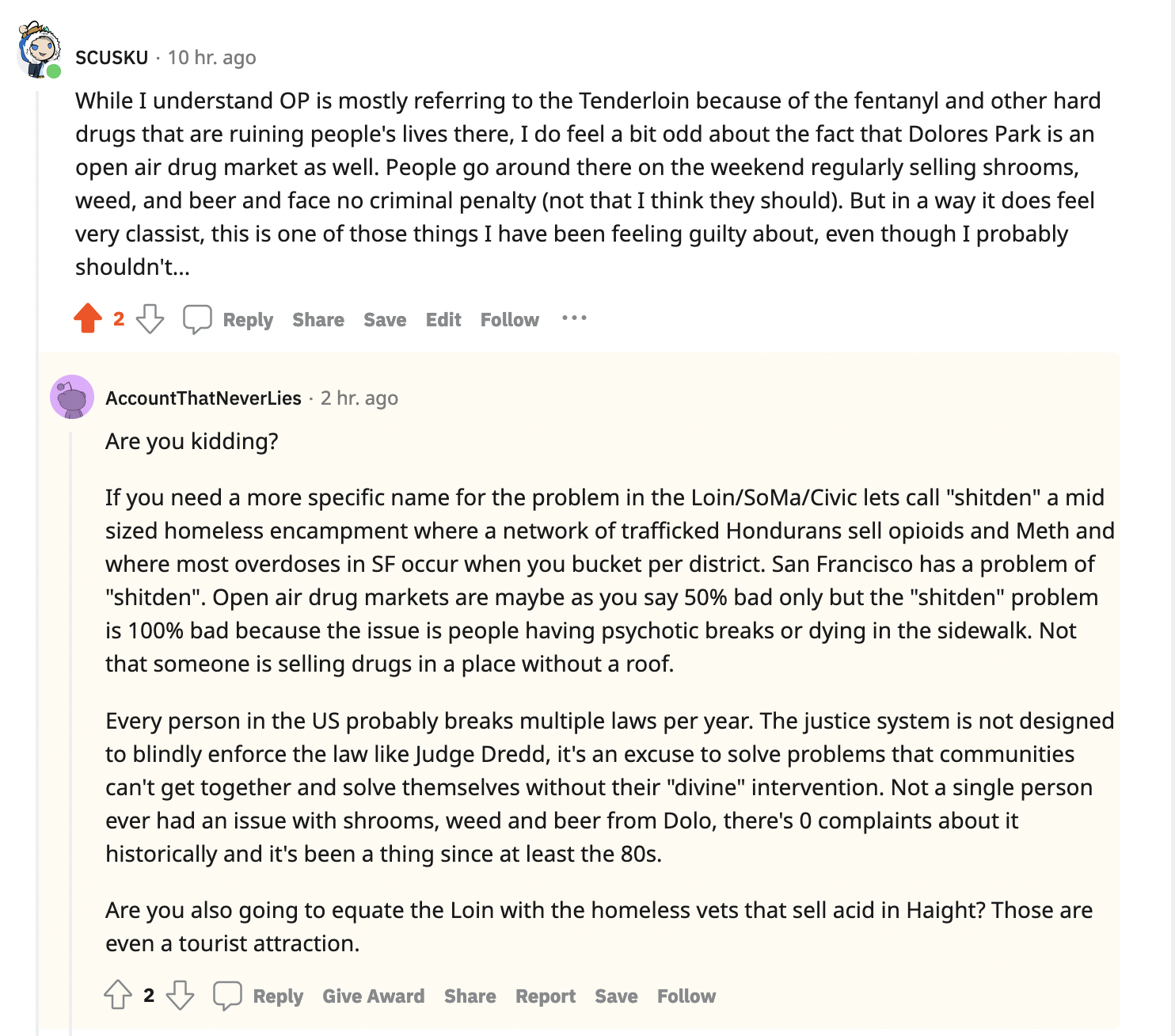 For those unfamiliar, the Tenderloin is a neighborhood in San Francisco in the heart of downtown that is riddled with homelessness, open air drug dealing, and is just a generally unpleasant place to be. The point I am trying to make here is that it seems slightly odd to me that we condemn open air drug dealing in a poverty striken neighborhood, when there are other Schedule I substances being sold in Dolores Park to upper middle class elites.

Now of course, I think the responses generally make sense in that the impact of mushrooms, marijuana, and alcohol are not nearly as bad as fentanyl, heroin, or meth, but again my general point isn't so much the real world impact but the fact that our legal system doesn't really distinguish between the two. Of course when it comes to enforcement we can see that there is in fact a large discrepancy in terms of what the law really is de-facto. In effect mushrooms are legal because police don't get called to arrest people for it, but you still could if for whatever reason they wanted to. Same goes for heroin, fentanyl, meth. People in the Tenderloin are using these drugs openly and many of them are "keeping to themselves" (as much as possible when living in a public space), so shouldn't the same rules apply? It seems as though they do seeing as the Tenderloin's current state of existence continues to be a thing. Anyways I am done ranting I just needed to get this off my chest. This is why I hate social media because it wastes my precious time because some jackass decided to make a mean comment that I can't handle. Bye.

This post is Day 1 of my #100DaysToOffload challenge. Want to get involved? Find out more at 100daystooffload.com